Jane is being recognized for 39 years of museum experience, including 30 years at the Children’s Museum of Pittsburgh, where she served as Program Director, Deputy Director, and, currently, Executive Director. Jane leads the team responsible for all aspects of the Museum’s mission and vision, exhibits, public programming, funding, and operations.

The Children’s Museum of Pittsburgh expanded in November 2004 after the completion of a $29M capital campaign. Attendance grew from 80,000 visitors to over 310,000 visitors annually. In 2019, the museum opened the Museum Lab, a learning environment for older children. With the completion of the Museum Lab, the museum has created the largest cultural campus for children in the United States. Both projects have received international recognition.

Jane served as the Board President of the Association of Children’s Museums and Greater Pittsburgh Arts Council and as a board member of the Fred Rogers Center, Benedum Foundation, and Forbes Fund.  She is a fellow at Carnegie Mellon University’s Studio for Creative Inquiry and received an honorary doctorate from St. Vincent’s College. She was named a Distinguished Daughter of Pennsylvania, a Leading-Edge Award winner from the Association of Science and Technology Centers, and received a Women's Leadership Award from the YWCA.  Her work in design has been recognized by the American Institute of Architecture.

Attendees at the ceremony, who included family, former classmates, and former teachers, were given insight into how Jane views the role of museums by watching a 2019 TEDx presentation by Jane, “Museums Can Be a Lab for Children’s Learning.” 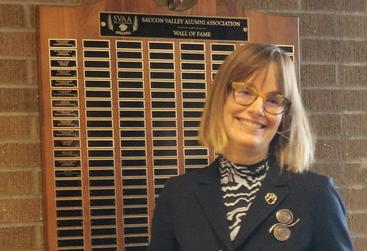