Following her graduation from Hellertown High School in 1957, Dr. Bauder earned a B.A. in sociology from Douglass College in New Brunswick, New Jersey. She continued her education and received an M.A. (1966) and a Ph.D. (1973) in Sociology from the University of Michigan.  As a student, Dr. Bauder achieved numerous scholastic honors including the Woodrow Wilson Fellowship (1961), admission to Phi Beta Kappa (1961), Alpha Kappa Delta (1967), and Phi Kappa Phi (1967).

Dr. Bauder began her career at Macomb County Community College as an Associate Professor of Sociology.  Two years later, she left the College to join the Department of Sociology and Social Work at the University of Detroit (U of D).  Dr. Bauder was named Acting Chair of the Department in 1970, Associate Chair in 1975, and Department Chair in 1976.  In addition to serving as an administrator at the University of Detroit, Dr. Bauder was an Associate Professor of Sociology from 1977 to 1982.  In 1982, she was named Dean of the U of D College of Liberal Arts.

Among her many accomplishments, Crain’s Detroit Business selected her as one of Detroit’s most influential women. Dr. Bauder has lectured and consulted locally and nationally on leadership, organizational change, cultural and architectural issues.  After 29 years of service, Dr. Bauder retired from the Board of Directors at DTE Energy Company in May, 2015, where she had been Presiding Director.  Dr. Bauder also served on the Board of Directors of Comerica, Inc. from which she retired in 2010 after serving for 24 years.  She was also a trustee on The Skillman Foundation board for 25 years, retiring in 2015.  During her tenure, she chaired the board for four years. While she lived in Michigan, Dr. Bauder was a Trustee of The Henry Ford Health System, having served as Board Chair of the HFHS’s West Bloomfield Board of Trustees.  She was a trustee for the Detroit Symphony Orchestra where she served on the executive committee. She served on the Michigan Council for Arts and Cultural Affairs (MCACA) and received the Michigan Museum Association’s President’s Award for Lifetime Leadership in 2004.  Dr. Bauder is a Director Emeritus of the Detroit Institute of Arts’ Board of Trustees.  She was a trustee on Habit for Humanity’s International Board, as well as serving as trustee for the Jacob and Gwendolyn Lawrence Foundation.  She was The University of Michigan’s alumna-in-residence and chaired the Detroit Festival of the Arts for four years.

Lillian Bauder resides in Columbia, Maryland.  She continues to be asked to serve on boards, teach, consult, and give lectures.  She is currently a trustee on the Baltimore Community Foundation board.

Ron Reichard, Chairman, with Elaine Donnelly (Class of  1957), who represented Dr. Lillian Hinckley Bauder at the Wall of Fame ceremony. 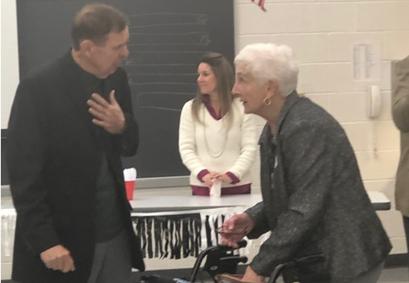 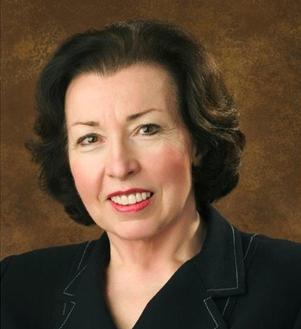